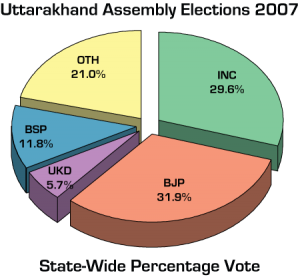 As expected, the winning party was able to squeak through with a small percentage margin of victory, but with a large haul of seats. In this case, the BJP with a third of the vote, won half the seats.

The actual margins were similar to 2002, with only a 2.5% vote separating the BJP and Congress. Even this tally does not include independent and rebel candidates previously with the Congress, who did significant damage to the party’s chances once again. In fact, both parties improved their position, leaving lesser room for smaller parties and independents who still managed to win 21% of the vote together.