Election Results a Reverse of 2002 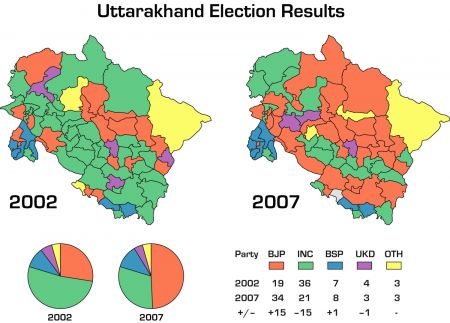 The votes are in, and it looks like a BJP near majority. Given that independents can easily haggle for plum positions from a party in such a dominant position, a BJP government is all but assured. In fact, this is a near reverse of 2002, so the more things change, the more they remain the same.

A loss of one seat for UKD (with only Pushpesh Tripathi holding his seat) reflects that, despite doubling its votes, the party’s support has gotten more spread out. The loss of Kanalichinna, long a stronghold of Kashi Singh Aeri, and Nainital, where Narayan Singh Jantwal stood, are particularly jarring. Yamunotri was also taken by the Congress, lending credence to Dinesh Agrawal’s claim of a division of votes (although who is taking from whom is an open question).

The results from the Election Commission so far:

According the Garhwal Post-Umeed India pre-election poll, BJP was leading in Bajpur before the election, so the tally might go to 35.

The two elections show that no government has yet been able to deliver on the expectations of Uttarakhand. Instead, voters have expressed their disappointment at the ballot box, by voting against the government, yet falling into the trap of duopolistic politics. An alternative has yet to emerge, which tells much about the crisis of democracy in the post-statehood period.

Here are some probable reasons for the election results:

The big question is whether the BJP will take this as their cue to impose their more extreme agenda, or will they pursue the development plank? Will they sell out the region’s resources? Will they polarize the population through a communal agenda? These are big questions that will need to be answered.