The 2012 state election sees the crumbling BJP deploying their last and strongest card by replacing their floundering chief minister with one they unceremoniously dumped in 2009. While Khanduri has perhaps saved the party from an ignominious thumping at the polls, will it be enough to regain the public’s trust and win the election? Or will the hard learned lessons of his earlier stint in office be heeded?

Retired Major General Bhuwan Chandra Khanduri has for many years been the BJP’s most formidable standard bearer. Amidst all the feckless and querulous politicians in Uttarakhand politics, his military bearing has evoked in the popular imagination an image of confidence and competence. Without his presence in its ranks since 1991, the BJP may never have maintained its strong position throughout the 1990s and into the 2000s as the choice of half the upper caste and ex-servicemen in the state. He still far outdistances his party in popularity in every poll.

However, as shown by his first stint as chief minister from 2007 to 2009, a one-man army has not been able to rule a state as complex as Uttarakhand, or a country like India. Instead, Khanduri’s military code rebounded on him and he was forced out midway through is term. Most embarrassing for a former general, it was a mutiny from within his own ranks that toppled him and made a mockery of the vaunted discipline of the BJP.

Most embarrassing for a former general, it was a mutiny from within his own ranks.

It is perhaps for this and other similar reasons there has been a dearth of civilian political leaders emerging from the armed forces. In the military, strict discipline and the hierarchy of command prevail, while politics is an often ugly game that requires a fair bit of finesse to navigate. Bonapartism has also been kept at bay by India’s strong civilian institutions, although it has still found utterance in nostalgic remembrances of Subhas Chandra Bose. Moreover, the flipside of the image of a strong leader is that of a military dictator whose capricious whim can turn in equal parts benevolent or tyrannical. One only has to look to neighbouring Pakistan to see how much military leaders have ruined a country in the name of saving it.

All in the Family 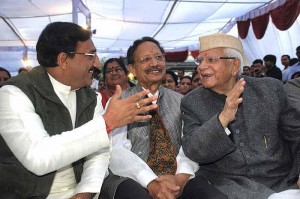 Nephew of late Congress Chief Minister of Uttar Pradesh and Lok Dal leader Hemvati Nandan Bahuguna, as well as the cousin of Congress MP Vijay Bahuguna and Congress Uttar Pradesh President Rita Bahuguna Joshi, the 77 year old Khanduri is part of the inner circle of elite Garhwali and Kumaoni families that have long dominated the politics of Uttarakhand. His friendship with former chief minister Narayan Dutt Tiwari and patronage of his successor Ramesh “Nishank” Pokhriyal reflect the closeness of these ties at the top.

Projected as chief minister even before the formation of Uttarakhand, Khanduri missed his chance in the first BJP state government of 2000-2002, as he remained preoccupied at the centre as minister of road, transport and highways in the NDA government. His role in implementing the National Highways Development Plan earned him high marks and seemed a natural extension of his experience as a commander in the Army Corp of Engineers.

Lonely at the Top

Beyond the centralization of governance, signs of creeping authoritarianism could be seen during Khanduri’s first regime. The severe persecution of veteran Uttarakhandi journalist Prashant Rahi for his alleged ties to Maoists shocked many in the media. Meanwhile little was done to check the very real mayhem caused by the student associations affiliated with the governing party. These and various other repressions against labourers and dam protesters across the state revealed a worrisome dark side to the administration.

Upon the BJP victory in the 2007 state election and his elevation to the position of chief minister, Khanduri was faced with a quandary. On one hand, leaving parliament and occupying an assembly seat was facilitated by fellow retired Lieutenant General T.P.S. Rawat’s resignation as an MLA from Congress. On the other hand, the ranks of his own MLAs were filled with novices and party veterans with checkered histories and their own styles of functioning, ambitions, and interests. Meanwhile, his martial training and inability to trust the basic competence of his own cabinet propelled him to concentrate decision making power in his office.

This extreme micromanagement led to policy paralysis through 2007 and 2008, as well as generated enormous discontent from much of the party’s base. Government work in many areas ground to a halt as Khanduri kept files to himself. His reliance on the controversial IAS officer Prabhat Kumar Sarangi also dented his clean image. Sarangi’s extreme gatekeeping as his assistant and perceived favouritism with visitors contrasted sharply with the openness of Narayan Dutt Tiwari who rarely refused anyone or their requests. Usually, people left Tiwari’s residence happy and loaded up with goodies, but often despondent if not angered by Khanduri’s inaccessibility. Although Sarangi was far from the svengali-type figure that many detractors believed, the shadow of corruption was enough to stir the BJP’s own against the General.

These rumblings quickly coalesced into active opposition led by the erstwhile chief minister Bhagat Singh Koshiyari who claimed credit for the election campaign that brought the BJP to power. After the 2009 parliamentary election debacle where the BJP lost all the region’s five seats for the first time in almost twenty years, Khanduri’s position became untenable. However, unlike Narayan Dutt Tiwari who had endured and survived a similar rebellion from Uttarakhand Congress President Harish Rawat during his administration, Khanduri’s style of functioning had left him few allies to counter the Koshiyari’s camp that included most of the MLAs. The unseemly spectacle of party functionaries rushing to and from Delhi to lobby for their respective leaders also affirmed that it was the high command and not the state unit that called the shots. This lesson in power politics proved too much for Khanduri who promptly resigned but not before elevating fellow Garhwali Brahmin Ramesh “Nishank” Pokhriyal to the CM chair.

Indeed, it was this collapse in the basic functioning of the state even more so than the high profile corruption cases that brought public cynicism to a new high.

Pokhriyal made Sarangi’s dismissal one of his first acts as the new CM in 2009. However, Pokhriyal quickly dissipated any goodwill with the electorate as the gap between his pronouncements and actual performance grew ever larger. Under Pokhriyal, even Khanduri’s command and control orientation lapsed into a free-for-all. By continuing the practice of retaining several important portfolios under the chief minister’s belt, little work got done while scams became the order of the day. Indeed, it was this collapse in the basic functioning of the state even more so than the high profile corruption cases that brought public cynicism to a new high and that provoked a severe erosion in BJP support. Before Pokhriyal was replaced in September 2011 in yet another BJP quiet coup, the BJP’s own polls showed it winning a mere seven seats and being reduced to third party status.

Panic before the Assembly Elections

Khanduri’s rapid restoration by the BJP high command was quickly followed up by a strategy to jump on the anti-corruption bandwagon and pass a carbon copy of Anna Hazare’s Jan Lokpal Bill at the state level. The BJP has been down this road many times, seizing on popular campaigns and subverting them for electoral gain. However, team Anna barely registered the crass opportunism at work and applauded the move as the ideal for the rest of the country. Only later, when the campaigners realized that they might be unfairly seen as supporting a government so tinged with corruption, did they back away from a direct electoral role.

Most disappointing for some of his associates was Khanduri’s choice to return as chief minister as opposed to making a clean break from the BJP. Journalist and publisher Rajan Todaria of the Uttarakhand Janmanch had promoted this option, while T.P.S. Rawat made arrangements for Khanduri to join his newly formed Uttarakhand Raksha Morcha. In retrospect, both ideas seemed like longshots given Khanduri’s loyalty to the party that was his home for twenty years.

After all this, what is certain is that the BJP has rested the entire 2012 election campaign solely on Khanduri’s reputation and the succession of quick populist actions he took in the four months as CM at the end of 2011.

After all this, what is certain is that the BJP has rested the entire 2012 election campaign solely on Khanduri’s reputation and the succession of quick populist actions he took in the four months as CM at the end of 2011. Conveniently erased has been the preceding four years which has brought Uttarakhand to its lowest point on almost every front. While projecting a popular leader has been the most common of election strategies, this already failed once with the exact same players in 2007. Whatever one might think of Khanduri, this whole picture should be kept in mind when pondering the vote.